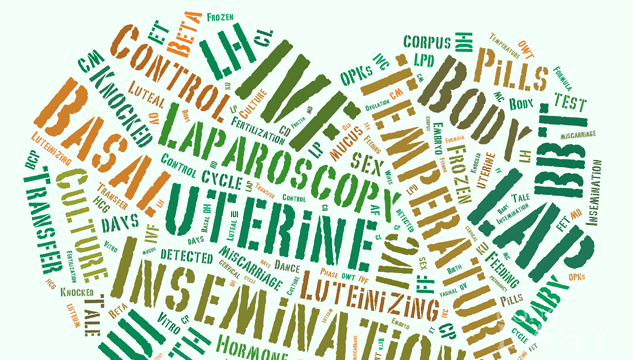 Lately I've been spending a lot of time contemplating my conflicting emotions.  Time is passing so fast.  My babies are no longer infants and are quickly approaching mobility.  And while there will always always be an ache in my heart for those tiny little NICU babies and the swarm of emotions I felt when I held them, I have to say I'm loving all the new firsts.

I always considered myself a baby person.  And in the first couple months of my boys' lives I seriously just wanted time to stop.  I could have spent an eternity just holding their teeny tiny little bodies and staring at their sweet newborn faces.  I was in my absolute glory.  I mourned waking up each morning knowing they were a day older.  Everyone kept telling me that it only gets better.  Imagine my surprise when it turns out that everyone is right!  (Amanda I'm mostly talking to you).

The boys turned 4 months old on September 20th.  4 months rocks ya'll.  They are laughing.  Like belly laughing, out of control giggles that make my heart want to explode.  They have found their feet and I"m pretty sure the cutest thing in the entire world is them laying on their backs, grabbing them and then rolling side to side.  They also now can be occupied with toys!  They will reach up and grab at toys hanging above them (with both hands and feet!) and can hold toys in their hands and shake them.  Speaking of hands they are in their mouth constantly.  Funny enough they suck/chew on their fingers vs. a thumb.  But they pretty much constantly have a hand in their mouth.  We also started cereal.  I'm sure I'm mentioned before that these boys are STARVING.  Like so hungry you guys.  They get 5 oz bottles every 3 hours and still act like they haven't eaten in days.  The cereal has been a big hit and it's making a big difference with their reflux which is awesome.  I've read all the research and articles that say that cereal isn't necessary and it's empty calories and doesn't help babies sleep but I beg to differ.  Because my guys have slept from 10-5:30am since we started (with the exception of the week of sickness - which I'll get into later).  So yeah for cereal - they love it, we get a huge kick out of feeding them, and everyone is sleeping.  That's a WIN.

We busted out the little jumpy exersaucer thing and Braxton is obsessed.  We shove a pillow behind him since he's still a little small for it and he will jump in that thing for HOURS.  He absolutely loves it and gets going so fast and high it sometimes makes me a little nervous.  But he will laugh and hit at the toys and lights and jump jump jump until he's basically exhausted.  As soon as I lift him out his eyes are closing and he's out for the count! 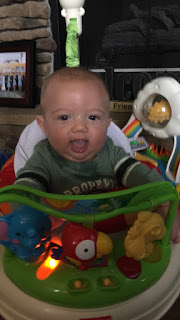 Brody has fallen in love with himself.  The other day my dad held a mirror in front of him for, I kid you not, an hour and a half and he smiles and talked and laughed the entire time.  He can be in a screaming fit and if you can coax him to open his eyes long enough to register the mirror he will stop cold and go straight to smiling and laughing.  My dad claims he's getting him a giant mirror for Christmas this year.  :)

As I hinted above 4 months also brought our first bout of sickness.  Sadly I brought it home and gave it to the boys.  We've been struggling for a couple weeks with nasty coughs and snotty noses.  No fun.  I was so proud of my first time mom self when they got sick.  I assessed the situation and calmly made the judgment call that it was just a cold and nothing the doctor could do and we'd just fight through it.  Well cue day 5 when they were so stuffed up they could barely breath and their coughs sounded like a barking seal.  We took them to the after hour peds office that night.  Where the very sweet nurse practitioner spent 20 minutes with us looking them completely up and down to announce that they do, in fact, have a cold.  I feel like I should get credit for holding off for 5 days though.

Four weeks in back at work and I think I'm finally ready to talk about it.  It's going....okay.  Everyone is surviving.  We take the boys to our very sweet babysitter Mon-Wed.  She has a 4 year old boy who goes to afternoon preschool and a 15 month old little girl.  Her kids are the sweetest and they love the boys.  We drop them off in the morning and they immediately all lay down on the floor together.  Her kids will spend hours just talking to the babies and holding toys above them and the boys will just laugh and smile.  Very sweet.  On Thursdays my parents come to our house and watch them which is working out great. I hoarded all my vacation days and am taking every Friday off for the rest of the year.  Come January I'll have to start working 5 days again and my mom will keep them Thurs and Friday.  Which really sucks because I think if I could work a 4 days week I would be okay with that schedule.  But that's not in the cards so I'll just be grateful for the time I have now.  I love my Fridays off with them and look forward to it all week long.  (Well except when you have two sick  babies and I'm by myself because that's not fun for anyone trust me).

So that's the recap of life at 4 months!  Needless to say it's pretty great.  And instead of wanting to freeze time I find myself looking forward to the next stage(s).  I'm excited for them to be able to sit up unassisted and am looking forward for when they start clapping their hands.  They can hold off on crawling because let's be honest I'm completely screwed when that starts!  But I'm sure we'll figure it out just like everything else.

What update would be complete without some pictures?! 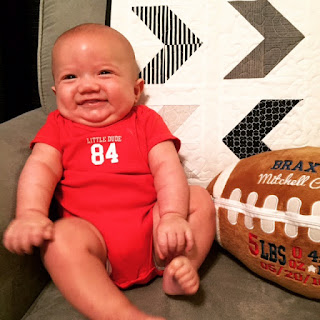 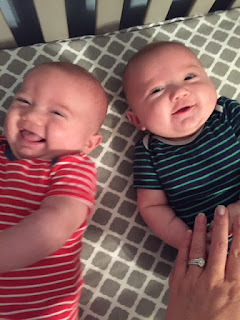 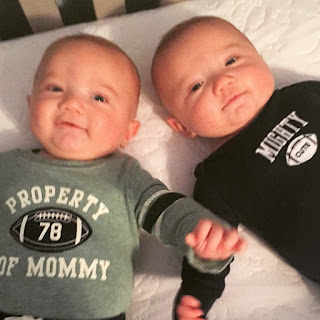 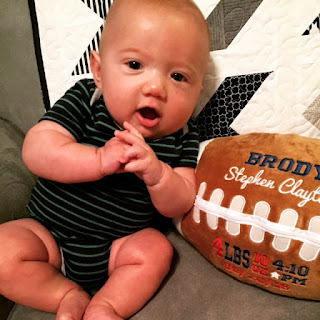 Brody 4 Months
Posted by Ms. Conceptions at 8:06 AM